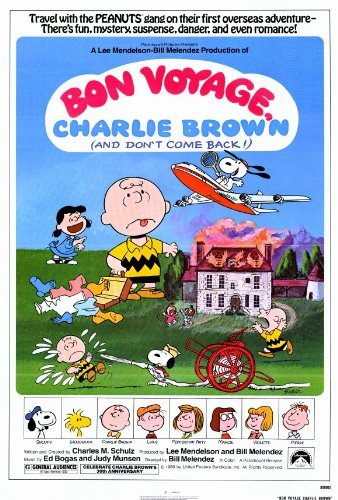 There's only one each of Charlie Brown and Snoopy in this movie, in spite of what the poster might lead you to believe.
Advertisement:

Bon Voyage, Charlie Brown (and Don't Come Back!!) is a 1980 animated film directed by Bill Meléndez. It was the fourth feature film based on the Peanuts comic strip by Charles M. Schulz, and the final one until The Peanuts Movie in 2015.

Charlie Brown's school has accepted two French exchange students, and Linus and Charlie Brown will be going over to France as foreign exchange students, with Snoopy and Woodstock in tow, along with Peppermint Patty and Marcie from their school. The same day, Charlie Brown gets a letter from France that Marcie reads as an invitation to stay at a chateau: the Chateau du Mal Voisin, or "The House of the Bad Neighbor".

They initially arrive in London, where Snoopy goes off to have his own adventures at Wimbledon (and do his John McEnroe impression) while the rest of the gang does some sightseeing before heading off to France.

Upon arriving in France, Marcie and Peppermint Patty stay at a farm with another student, and Charlie Brown and Linus continue to the chateau, where there are no lights on and no answer at the door, so they must stay outside. Food and blankets are sneaked outside by Violette, the young girl who invited Charlie Brown and is defying her uncle, the Baron, to be hospitable to Charlie Brown and Linus. Eventually, Violette is able to explain her secret, and a certain event inspires the Baron to mellow his inhospitable attitude.

The 1983 TV special What Have We Learned, Charlie Brown? serves as a sequel of sorts, with the gang visiting WWI and WWII memorials on their way back to London from France. The special earned a Peabody Award.

They obviously had a small sum of money to rent a car with...

They obviously had a small sum of money to rent a car with...