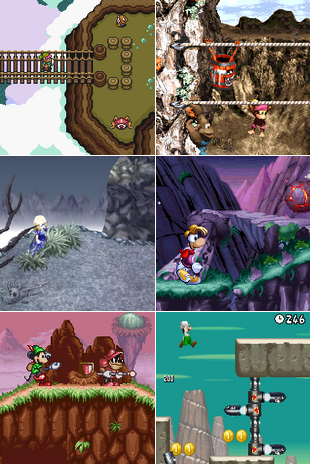 Their lives peaked at these exact moments.
L - R, top to bottom  The Legend of Zelda: A Link to the Past, Donkey Kong Country 3: Dixie Kong's Double Trouble!, Final Fantasy IV (DS remake), Rayman, Disney's Magical Quest, and New Super Mario Bros.
"It's called Death Mountain 'cause YOU WILL DIE!"
— Brentalfloss referring to Zelda II: The Adventure of Link
Advertisement:

A stage in a video game, particularly platformers, that takes place on a mountain or similarly high, rocky place. Thankfully, the usual problems of low air pressure are generally not found in these stages. Instead, natural hazards include falling rocks, crumbling ledges, rope bridges, and of course, very, very long drops. High wind may be a hazard in some places as well. Enemies may include eagles or other high-flying birds, Bighorn rams, yetis, and whatever nasty things the world may have living in the inevitable caves.

Death Mountain is commonly merged with other areas. For example, the Lethal Lava Land version is of course a volcano, while others are snow-covered peaks. In some cases, once you reach the peak, you can keep right on climbing into a Level in the Clouds. It's usually quite late in the Sorting Algorithm of Threatening Geography. It's often also a Monster-Shaped Mountain. Despite the name, it is not portrayed as being the opposite of the real life Death Valley.

Named after the recurring area in The Legend of Zelda series. See Scaling the Summit for instances when actual mountain climbing is depicted.