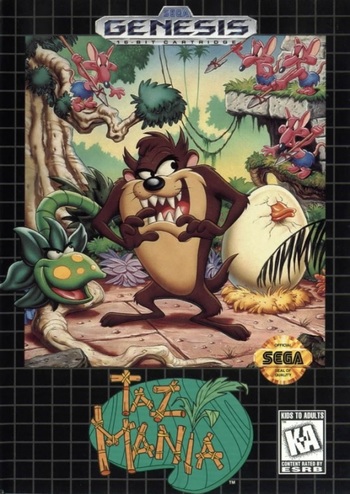 A Licensed Game based on Taz-Mania, published by Sega in 1992, and developed by Recreational Brainware for the Genesis, NuFX for the Game Gear, and Technical Wave for the Master System.

One day, Hugh Tasmanian Devil tells his three children, Taz, Molly, and Jake the story of giant preshistoric seabirds that once ruled Tasmania. These giant seabirds laid giant eggs that could feed a family of tasmanian devils for over a year. In his story, he mentions there being a legend that somewhere in Tasmania, there is a lost valley where the giant seabirds still nest. Fascinated by the prospect of a potentially large omelet, Taz leaves his house in search of the lost valley and the giant seabird egg.

The game is a side-scroller where Taz searches for the legendary giant seabird egg, Although each version of the game is different, the story is the same, and the gameplay and the stages are similar; Taz can jump, spin into a tornado, and eat various objects. Taz's tornado spin allows him to defeat most enemies as well as gain extra jump distance, knock away items and get past certain obstacles unharmed. Taz can eat most items throughout the levels, such as food recovery items, extra lives, and continues. He can also eat chili peppers to breathe fire and stars to get temporary invincibility. Other items, such as bombs and weed killer can be thrown at enemies, but will damage Taz if he eats them.

A sequel of sorts, Taz in Escape from Mars followed in 1994. Although Escape From Mars features a similar design and concept, it is more based on the Looney Tunes shorts than the Taz-Mania cartoon.

Not to be confused with the Nintendo versions of the game, released by Sunsoft in 1993 for the SNES and 1994 for the Game Boy.

Tropes applying to more than one version: