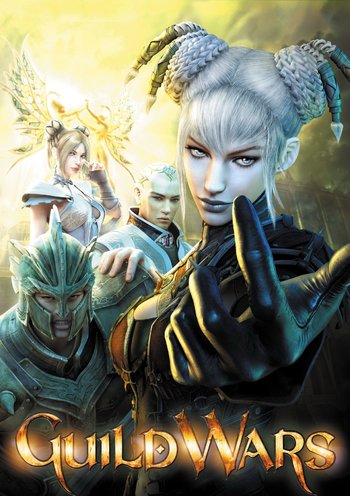 "Bless you, Dwayna for my wisdom. Thank you, Grenth and Balthazar, for my prowess in war. Praise to Melandru for my courage, and to Lyssa for my incredible good looks."
— Sogolon
Advertisement:

Guild Wars is a video game produced by ArenaNet, a splinter group formed off of Blizzard Entertainment, and published by the Korean MMO giant NC Soft. It has been both lauded and criticized for its notable and unique business plan, which is quite simple: It's an MMO that requires no monthly fee. Part of the reason is due to instancing, and part due to design. Anet has said (to paraphrase) that it's not aiming to be a World of Warcraft killer, but that it's happy being its own niche. Indeed, Guild Wars was largely an experiment to see if this business model could even succeed in the first place, which it undeniably has.

The game, instead of one core game and several expansions, features three stand-alone "campaigns" which have independent, if interlinked, plots and differing mechanics. The three can be linked, allowing one character to play all three stories. A fourth release acts as an expansion that can link to any of the main campaigns and is notable for providing primarily end-game content. The original campaign, subtitled Prophecies after the second campaign launched, contains 6 player classes (termed "professions", Warrior, Ranger, Monk, Elementalist, Mesmer, Necromancer) and each character chooses a permanent primary profession and a changeable secondary (the order matters). The two additional campaigns, Factions and Nightfall, each feature two additional professions unique to their continents (which are East Asian (mainly) and North African/Middle Eastern themed, respectively). Additional story elements were introduced in the free Guild Wars Beyond update patches, including the War in Kryta and Winds of Change. The intent of these releases was to create a bridge between the original campaigns and the sequel.

The game, instead of a roving world with several human-controlled factions duking it out, instead plays like a console RPG: A storyline-based affair that has a definite ending; thus, it can be beaten. It can be played solo (with AI-based henchmen and heroes), or in groups, and features its titular "Guilds" as organized player groups.

Also notable is that it tries to balance both casual and hard-core play, and has both PvE ("Player versus Environment", the "single-player" portion of the game) and PvP, with specific arenas, tournaments, and guild versus guild battles for the latter. The game is virtually devoid of Level Grinding, due to a low level cap of 20, and instead focuses on what skills, abilities, and strategies one brings to the field of battle, instead how much time one has spent playing the game.

Stylistically, it's very hard on physical realism, and exploring the world of Tyria for the sheer level of detail put into its architecture is rather breathtaking. As a sort of hybrid between the typical "Persistent World" MMO and a CORPG, the game dips its ice cream scoop of writing into both buckets.

A sequel, Guild Wars 2, was released in August 2012. Provided the player has merged accounts from the two games and has the expansion Eye of the North, some achievements that are accomplished in Guild Wars unlock bonuses in Guild Wars 2 through the Hall of Monuments.