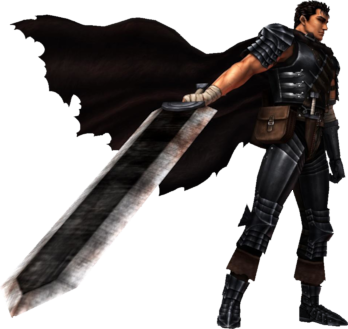 Even with just one non-prosthetic hand and one intact eye, he can swing the biggest heap of raw iron.
"He's swinging that two-handed sword around with only one arm. I don't even want to get near him."
— Solid Snake on Ike, Super Smash Bros. Brawl
Advertisement:

A zweihänder is a two-handed sword. It's right there in the name ("zwei" meaning "two" in German and "händer"...well). However some characters don't want to read the manual...

Say a character has a large sword. It may be anything from a regular two-handed sword, or it may be something utterly ludicrous in size. Clearly this thing requires both hands for any normal person to swing it. So anyone who swings around something so huge using only one hand is obviously not normal, and not someone to be trifled with. Often they'll be able to wield this huge weapon as effectively as a 'regular' single handed weapon. In fact, it will often seem as if the enormous slab of metal weighs next to nothing, allowing the character to pull off ridiculous(-ly awesome) feats that make even expert swordsmen look like amateurs. And if a guy is swinging a sword the size of a Buick around one-handed, what would happen if he used both hands?

The character is typically The Big Guy, The Brute, or The Berserker. Quite often they're the protagonist. Anyone doing this usually possesses some degree of Super Strength or Charles Atlas Superpower.

Very common in video games and manga/anime. Does not have to involve a BFS (though it often does), or even be a sword. Any normally two-handed melee weapon qualifies, though swords are by far the most common usage of this trope.

In real life, trying to use a two handed sword with one hand is generally a bad idea, though not for the reasons you might think. While in fiction two-handed blades often look difficult to even lift much less use in combat, real-life two-handed swords are impressively light and well-balanced for their size (Renaissance two-handed swords that weren't ceremonial fell within 5-8 pounds

note 8 pounds is nothing to sneeze at; that's about the weight of a gallon of milk. Sure you can lift it, but try swinging it around energetically for any length of time; it's quite a workout.) Swords like Zweihänders or the Japanese nodachi have very long hilts to acts as levers, with the hand closest to the guard (usually the right one) acting as a fulcrum. With one hand you lose this mechanical advantage; it's still possible for a person of average strength to use the sword, it's just a lot less effective.

It is not this trope if the sword or other weapon could be reasonably used one handed by a normal person.

Of course, some of the weapons used by practitioners of this trope are so huge that not even using both hands would do them any good

, even if the weapon was made lighter by using an aluminum alloy instead of solid steel.

Often comes with Implausible Fencing Powers. When this is due to the wielder being physically very large, see Giant's Knife; Human's Greatsword. Sometimes taken to ridiculous levels when Dual Wielding is involved. For the Gun Counterpart, see Firing One-Handed. Related to BFS. Subtrope of Improbable Use of a Weapon.