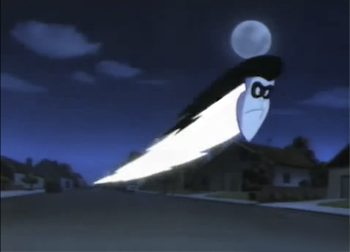 "Why don't you make someone else ride your lightning, for a change?"
— The Guardian of Metal, Brütal Legend
Advertisement:

Using lightning or electricity as a form of travel. It can vary from turning into electricity yourself to traveling along it, using it as some sort of conduit, or even just surfing on a bolt of lightning.

May be Fast as Lightning. A Sister Trope to Electric Slide. For riding lava, see Lava Surfing.

Not related to Electric Torture or the Metallica album (although the trope was named for the latter). Also not related to when a bipolar person decides No Medication for Me while in a manic phase, occasionally termed "riding the white lightning". Nor does this refer to execution via electrocution, although the trope title is a slang phrase for such an execution.