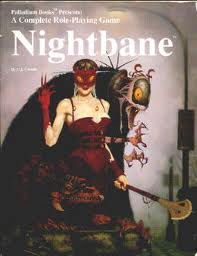 Beauty and The Beast!
Advertisement:

Nightbane is a Dark Fantasy Tabletop Role-Playing Game and setting created by C. J. Carella and published in 1995 by Palladium Books. Originally published under the title "Nightspawn", the game's name was changed after legal threats from the lawyers of Todd McFarlane, creator of the Spawn comic book.

The setting is this: On March 6, 2000, the entire planet was shrouded in unnatural darkness for three days. This was due to The Nightlords, a secret cabal of supernatural beings from another dimension, and their shapeshifting minions, who then quietly seized control of the world's governments and corporate powers. It was also during this darkness that thousands of people learned that they could become inhuman monsters with strange powers and often terrifying visages. These shape-changing beings are called the Nightbane, for it was at night that they become monsters. It is now up to the Nightbane to save the Earth from the Nightlords with the rest of humanity unaware of their secret war.

The game uses Palladium's "Megaversal" system, which is also used by the multi-genre game Rifts and the horror game Beyond the Supernatural, among others. Players don't have to be just Nightbane, however, they can also be human, vampires and even mysterious angelic beings known as The Guardians.

There are several factions that the players can encounter, or even join: The Resistance, made of up Nightbane who oppose the Nightlords; The Underground Railroad, who just wants Nightbane to keep hiding from humanity; The Warlords, Nightbane who used their powers to take over gangs and organized crime; The Nocturne, an alliance of supernatural beings (including vampires, whom most Nightbane do not trust); The Seekers, a group (mainly of humans) who investigate magic and the supernatural; The Spook Squad, an organization made up of (former) government agents who survived the Nightlord takeover and are trying to retake control (but are underpowered and barely understand what's going on); and The Lightbringers, all-around do-gooders led by The Guardians.