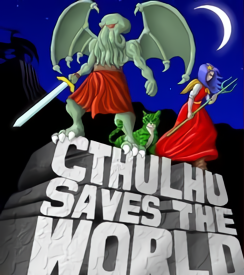 He didn't actually need the sword, he just likes swishing it around.
"There are few who'd deny, at what I do, I am the best
For my talents are renowned far and wide
When it comes to surprises in the moonlit night
I excel without ever even trying
With the slightest little effort of my ghostlike charms
I have seen grown men give out a shriek
With a wave of my hand and a well-placed moan
I have swept the very bravest off their feet
Yet year after year, it's the same routine
And I grow so weary of the sound of screams
And I, Jack, the Pumpkin King
Have grown so tired of the same old thing"
— Jack Skellington, The Nightmare Before Christmas
Advertisement:

When the protagonist of the work is itself some horrific being that sends people screaming in its wake. They might never have been human, or possibly might have been once, but now they are some inexplicable creature that has no place in this world. These Horrifying Heroes not only look frightening, they also have frightening abilities to match, and could just as easily be imagined as a bad guy in nearly any other story. They tend to be an Anti-Hero, or villains who have had a Heel–Face Turn; however, whether they are true heroes or just a Villain Protagonist (or anything in between), they still get to be the effective hero of their story.

Characters which qualify as a Horrifying Hero include the Eldritch Abomination, Cthulhumanoids, Humanoid Abominations, Starfish Aliens, a Living Shadow, a Demon and other such things which by their very nature are normally Obviously Evil. Characters which appear human part of the time can qualify, but only if their alternate form is such a thing, and is consistently described as Nightmare Fuel, not just weird or ugly in appearance, and they generally need the powers to match. After revealing the character's true nature, a person would have to be a Nightmare Fetishist and crazy to boot to find the character appealing.

Subtrope of Creepy Good, which is when any character on the side of good (not just the hero) is perceived by those around them as creepy.

As for characters which are scary but don't qualify for this trope, you will likely find them under Reluctant Monster, Non-Malicious Monster or Ugly Hero, Good-Looking Villain. For characters whose behavior is horrifying, see Terror Hero.