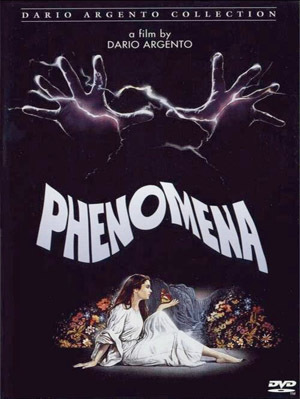 Jennifer Corvino (Jennifer Connelly), the daughter of a famous actor, Paul Corvino, arrives in an elite academy in Switzerland. Unfortunately, there are several factors that make the transfer to a new school hard on her:

During one of her nightly trips, Jennifer meets and befriends Professor John McGregor (Donald Pleasence), a kindly old entomologist who has been helping the local police with the murder investigation. McGregor is fascinated by Jennifer's strange gift, and soon she gets to put her abilities to good use by doing a little amateur sleuthing of her own.

Phenomena is a 1985 film directed and written by Dario Argento, starring a young Jennifer Connelly (in her first leading role), huge swarms of flies and a chimpanzee wielding a razor. The initial U.S. release of the film was edited down and re-titled Creepers, though it has since then received an uncut DVD release in the States.

Was the main inspiration for the original Clock Tower game for Super Famicom.

Not to be confused with another film titled Phenomenon, which is an entirely different creature.