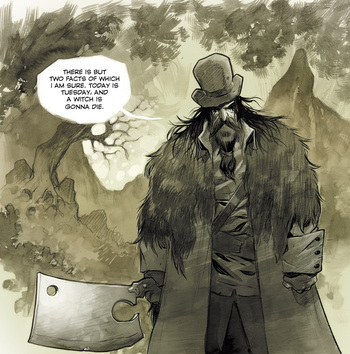 Rondel, the protagonist, and The Devil's Cleavernote it's Wednesday
"Well m'am, the story of the Iron Child is always changing. He lived long ago, or is yet to be born. Depends on who's doing the telling. But what everyone knows is that the Iron Child bears a mighty ax with the names of the wicked writ upon it."
— James Stoneturner
Advertisement:

Hillbilly is a Sword and Sorcery Dark Fantasy adventure series by Eric Powell (creator of The Goon), set in a fantasy realm drawing less from medieval Europe and more from the myths and folklore of rural Appalachia. Unlike The Goon, it's more-or-less kid-friendly, if still fairly dark.

Rondel is a wanderer, travelling from place to place. However, he is armed with Lucifer's own Meat Cleaver, and unnatural sight bestowed upon him by a witch. Wherever he goes, trouble follows.

The first three volumes of Hillbilly tell a single, complete story about Rondel's origins and his war against the witches of the hills. The fourth volume, "Red-Eyed Witchery from Beyond", brings him back for a shorter and more self-contained story about Fantasy Aliens. No fifth volume has yet been announced, although it's not impossible that Powell will circle back to it some day.

There are many tropes about Rondel the wandering hillbilly. This is but one index: