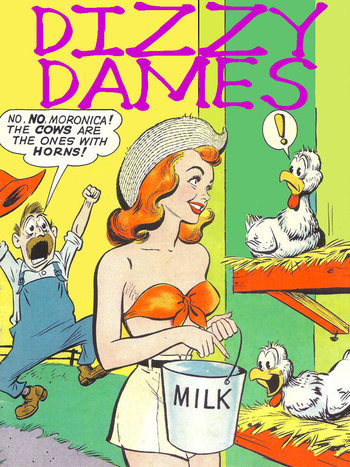 Dizzy Dames (Tagline: 'Screwballs in Skirts') was an early 1950s humour anthology comic published by ACG. As the title suggests the stories were all female dominated, though the actual dizziness of the dames in question varied by character. The line up included:

While the humour tended towards the cheeky, and many of the characters were drawn as Ms. Fanservice (especially Moronica) the stories and art themselves were no more explicit than those found in Archie. Naturally, given this is a humour comic from The '50s, Values Dissonance abounds for the modern reader.

This Comic Book contains examples of: