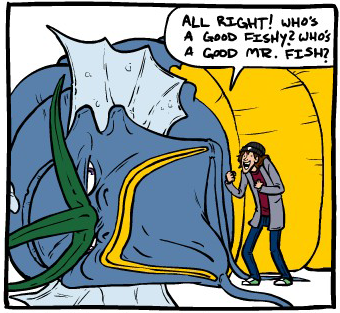 Gyarados is unamused.
"I have created wounded art. An uncompromising weapon that, in a fit of graceful agony, will rend and tear until there is nothing left. This creature is death."
[beat]
"I call him Fluffles."
— Unnamed Guard,

A big, scary, dangerous monster with a bizarre, cutesy name befitting a housepet. Custom dictates for the creature to be introduced by their owner calling for them, the enemies laughing at the creature's ridiculous name, only to be interrupted by earth-shaking footsteps as the pet enters the scene. The customary response is to run away really quickly. Screaming is also highly recommended.

Sometimes writers will play with the trope by making the monster look big, scary, and vicious, and yet be as sweet and lovable as its name suggests. Other times, justified because the monster was named when it was not yet big, scary, or vicious.

A.K.A. Big Monster Cute Name. A specified variant of Ironic Nickname. If the monster feels a sense of shame regarding their name, it's also an Embarrassing First Name. Compare Killer Rabbit. See also Fluffy Tamer, the person most likely to name the critter "Fluffy" in the first place. See Sealed Evil in a Teddy Bear for this combined with Sealed Evil in a Can. See also Special Person, Normal Name, Tom the Dark Lord, Super-Fun Happy Thing of Doom, People's Republic of Tyranny, and Cute as a Bouncing Betty, a weapon-specific subtrope of this.

Polar opposite of Deathbringer the Adorable.

Leon is this---at least, according to Mathilda.

Leon is this---at least, according to Mathilda.