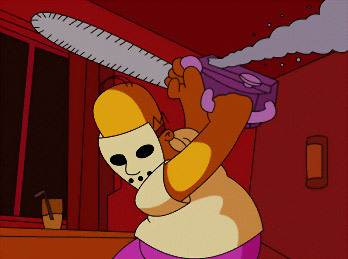 "BARTYOUWANNASEEMYNEWCHAINSAWANDHOCKEYMASK?!"
"Everyone thinks Jason uses one of these, but he never does."
— The Cinema Snob reviewing

Friday the 13th Part 2 (as a girl carries a chainsaw)
Advertisement:

A common reference of a Slasher Movie serial killer: a big guy wielding a chainsaw and wearing a hockey mask. Enormously common in parodies and tributes of the genre.

This is something of a Dead Unicorn Trope, since it isn't actually based on any single slasher movie character. It's actually a Composite Character between two famous Slasher Movie killers: Jason Voorhees of the Friday the 13th series (who wears the hockey mask) and Leatherface of The Texas Chainsaw Massacre series (who carries the chainsaw).

While it might seem like a case of Shallow Parody, even the people who know a lot about horror/slasher films tend to use this trope, so that's not the case. It's likely just a Captain Ersatz of the two, since neither of them are in the public domain.note Both characters will not enter the public domain until around 2100.

Note that while wearing a mask while using a chainsaw is generally a good idea even when using it to cut up the things it's intended for (sawdust and splinters can end up flying everywhere when using a chainsaw on wood), a hockey mask would not be a good choice of one (because while it does have face protection, it doesn't exactly include eye protection).

A Sister Trope to Sackhead Slasher (drawing on Jason's pre-hockey mask iteration), and a Sub-Trope of Stock Slasher.

Caitlin gets stuck in a toilet after a prank goes wrong.

Caitlin gets stuck in a toilet after a prank goes wrong.