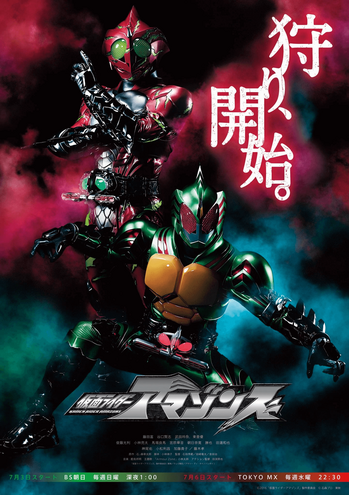 Hunt, start!
"In order to protect humanity...I had to abandon mine."
—Jin to Professor Hoshino
Advertisement:

Kamen Rider Amazons is a 2016-2018 web series part of the Kamen Rider franchise loosely based on Kamen Rider Amazon. It was specifically planned for release on the Amazon Prime streaming service debuting on April 2016 in Japan and on April 2018 worldwide with English subtitles under the Market-Based Title Amazon Riders (the first official Kamen Rider import since The First). As such, unlike the Merchandise-Driven shows airing in the Sunday morning kids' slot, Amazons is a Darker and Edgier (and Bloodier and Gorier) take on the tokusatsu formula—even more so than the original Amazon series. A re-edit of the first season aired on Japanese television in 2016. A second season was produced following the success of the first, and began streaming on April 2017 in Japan.

The series revolves around genetically-engineered mutants known as Amazonz, around four thousand of which are set loose into an unnamed city after a mysterious lab accident. Though normally able to mimic humans and live peaceful lives, the Amazons regress into ravenous flesh-eating monsters when the medicinal suppressant within their armlets runs out after two to three years.

Season 2 reveals that in the five years since the conclusion of S1, the existence of the Amazons has become public knowledge, putting Nozama Pharmaceutical out of business. In their place is 4C (Competitive Creatures Control Center), a new government organisation tasked with hunting down and containing the Amazons threat. However, the Amazon Cells have mutated into a strain capable of infecting humans, transforming victims into insane and bloodthirsty monsters.

Chihiro (Kamen Rider Amazon Neo) is a mysterious young Amazon who struggles to retain his humanity against his primal hunger for human flesh. While on one of his daily hunts for rogue Amazons, he happens to meet Iyu, a young girl who has been resurrected from the dead by 4C as a "Sigma-Type Amazon", an undead, emotionless fighting machine. Chihiro falls in Love at First Sight, and believes that if he can help Iyu regain her humanity, then there is hope for him doing the same.

The series concluded with Kamen Rider Amazons The Last Judgement, a theatrical movie released in May 2018, with two compilation movies of the first two seasons being released a few weeks before it.