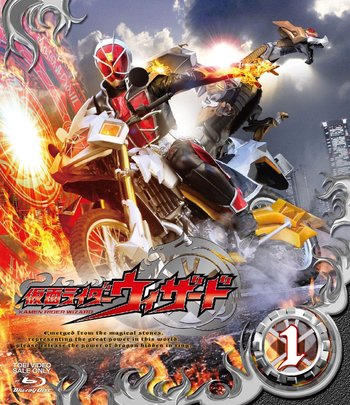 Now, it's showtime.
"The rings of magic, the Wizard Rings. They shine on the hands of the modern mage, as he changes despair into hope."
— Opening Narration
Advertisement:

Kamen Rider Wizard is the 2012-2013 Kamen Rider series; the fourteenth entry in the franchise's Heisei era and the twenty-third series overall.

A dark magical ritual is held on the night of a solar eclipse, summoning a horde of evil spirits known as Phantoms into this world. These monsters manifest themselves through humans with magical potential ("Gates") who have been pushed past the Despair Event Horizon, and seek to create more of their kind by destroying the hope of innocent people.

Haruto Soma is a young man who manages to survive the dark ritual, finding out afterwards that it has bestowed upon him the ability to use magic. He receives a magical belt and set of rings from a mysterious wizard in white who teaches him to channel his new abilities and become Kamen Rider Wizard, arch-enemy to the Phantoms.

With the aid of the enigmatic Koyomi, aspiring apprentice Shunpei Nara, rookie detective Rinko Daimon, and archeologist Shigeru Wajima, Haruto must learn to become the champion of hope and defeat the Phantoms as Kamen Rider Wizard.

Aired alongside Super Sentai shows Tokumei Sentai Go-Busters and then Zyuden Sentai Kyoryuger, with the cast meeting those of both in Super Hero Taisen Z, in the Super Hero Time block.

Unleashing a fiery attack on the arrogant enemy

Unleashing a fiery attack on the arrogant enemy