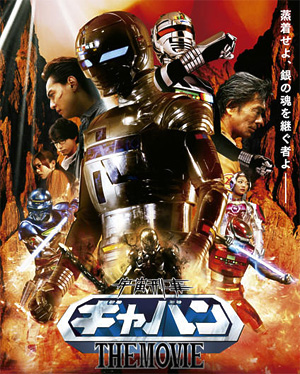 "Race through and leave light in the dust!"
Advertisement:

Space Sheriff Gavan: The Movie is a Tokusatsu movie released in 2012 as part of the 30th Anniversary celebrations of the original Space Sheriff Gavan television series. It is considered both a revival and a sequel to that show.

Fifteen years ago, three childhood friends made a promise that one day they would travel into space together. As adults, Geki Jumonji and Toya Okuma realise their dream by travelling on an observation mission to Mars, but tragedy strikes and the two young men are hurtled into the void of space, leaving the last member of their trio (Itsuki Kawai) alone on Earth.

Geki is saved from certain death by the Galactic Union Patrol and makes the decision to join them, training to inherit the designation and powers of the revered Space Sheriff Gavan so he can protect the Earth.

A new incarnation of the Space Crime Organization Makuu* A portmanteau of the words for "archdevil/Black Magic" and "evil"., led by the sinister Black Knight Brighton, is attempting to free Don Horror from the confines of Makuu Space. Discovering that they are targeting the research facility where Itsuki still works, the rookie Geki leaps into action along with his G.U.P. partner Shelly. There he must prove that he is worthy of inheriting the mantle of Space Sheriff Gavan, but to do so he must discover the will to fight even against the most tragic of circumstances.