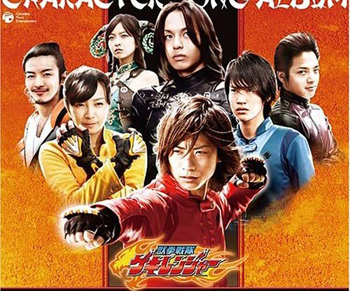 "A martial art which grants the power of beasts through sensing one's own feral spirit: Juken.
Juken is split into two opposing styles.
One, a Juken of Justice: Geki Juken Beast Arts!
The other, a Juken of Evil: Rin Juken Akugata!
Martial artists destined to fight.
Every day they aim for the top.
They learn. They change."
Advertisement:

Jūken Sentai Gekiranger (Beast Fist Squadron Gekiranger) is the 31st program in the Super Sentai series, airing from 2007 to 2008.

SCRTC (pronounced "Scratch") is a sportswear company that acts as a front for a secret martial arts academy teaching the ancient art of "Juken"note Beast Fist. The academy specialises in the "Geki Juken Beast Arts"note Wild Fist Beast Arts school of Juken, teaching students to harness their inner spirit of justice to generate a powerful force called "Geki".

One day, a talented student of Geki Juken Beast Arts decides to defect from the academy in his pursuit of more power. He revives the opposing school of Rin Juken Akugatanote Predatory Fist Evil Arts, an evil style that reaps strength from the suffering of others, and resurrects an army of undead Rin Juken fighters.

Opposing him are the top three students of Geki Juken: the wild child Jan Kandou, the straightforward and honest Ran Uzaki, and the stylish Retsu Fukami. With their training and Gekichangers, they harness their Geki to transform into the heroes of Geki Juken Beast Arts: the Gekiranger.

While on the surface, Gekiranger focuses on Chinese martial arts, it more specifically takes its elements from the Wuxia genre: split sects, constant competition in martial arts, and Wire Fu techniques very prominent in Wuxia media, to name a few. And also, since a major standpoint of the series is how heroes and villains alike strive to improve and perfect their skill, it was a notable entry exhibiting Character Development to both sides.

Despite having some of the worst TV ratings and toy sales in Japan, it was met with good success in Korea and a sizeable fandom in English-speaking countries.

Partnered with the Kamen Rider series Kamen Rider Den-O before concluding its airing alongside the first episodes of Kamen Rider Kiva in the Super Hero Time block.

Note: The word "Ken" used throughout the page can mean either "Fist"/"Ken", alternatively "Kobushi", or "Martial arts"/"Kenpo", owing to the same Kanji.

Due to Long being unkillable, the Gekirangers decide to curse his immortal body and seal him away as a sphere forever.

Due to Long being unkillable, the Gekirangers decide to curse his immortal body and seal him away as a sphere forever.