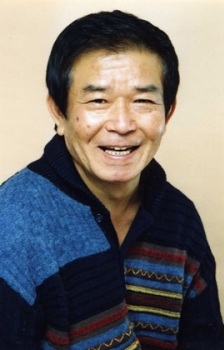 Hiroya Ishimaru (born February 12, 1941 as Shinji Ishide), another veteran seiyuu, in the same caliber of Akira Kamiya, who pops up occasionally in voice acting. Hiroya is most famous for his role as Kouji Kabuto from Mazinger Z, though he does not reprise his role in Shin Mazinger. His voice range is incredible that in one second, he is a sophisticated old/middle-aged man, in another second he's using a kid-friendly voice. Of course, in any situations, most of them has a chance to be Hot-Blooded.

He is also the official dub voice of Jackie Chan. And as seen in his role as Lei Wulong, he is incredibly fluent in English, as in "I can't believe this guy is actually Japanese" fluent.