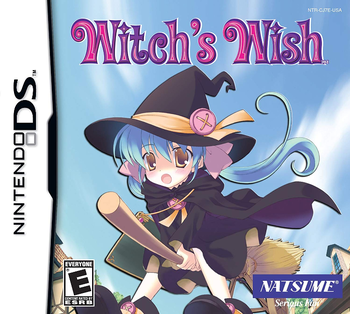 Magic should only be used by those who truly need it.
Advertisement:

Witch's Wish is a Nintendo DS Adventure Game created by TryFirst and published by Natsume in 2010. You play as Vicky, a young girl who longs to be a witch but can't afford the upper-class schooling witches require. Luckily, she gets her chance when a mysterious girl with powerful abilities awakens Vicky's magic—and just in time, as a dark force threatens the town. It's up to Vicky to learn spells, help her neighbors, and save the town!

Not to be confused with 2009's A Witch's Tale, which also has a witch-in-training and Geometric Magic but has a darker tone.