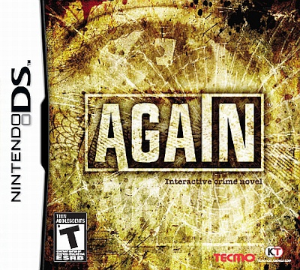 Again: Interactive Crime Novel is an Adventure Game for the Nintendo DS, developed by Cing and published by Tecmo. You assume the role of FBI Agent Jonathan "J" Weaver, investigating an unsolved 19-year-old serial killing case known only as the Providence Murders, with his partner Kate Hathaway.