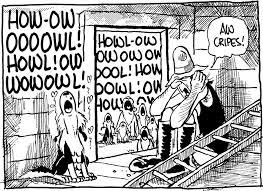 "As a young fela I scorned the young males in our tribe—they were overbold and self-satisfied. When I came into my season I made sure to be far away from the clan, so I would not be betrayed by nature into bearing a litter that I did not yet desire. I found that I enjoyed being by myself; enjoyed the solitary way of the hunter."
— Roofshadow, Tailchaser's Song
Advertisement:

Many animals have a mating season or an estrous cycle (referred as "going into heat"). Depending on the animal, this can be very messy, smelly, or (especially when it comes to males in rut) dangerous.

In fiction, mating seasons and estrous cycles are presented as a hindrance to characters. How this is presented depends on whether the character is the one in season or not.

Usually, this trope occurs for dog or cat owners during heat cycles. It's usually depicted as their female pet having gone into heat. The owner doesn't know how to deal with the mess, smell, and/or noise of an animal in heat. If they have a male pet, they'll have to quarantine them. Even if they don't have a male pet, a common gag is male animals (usually stray or free-roaming cats) hanging around their house. Sometimes this occurs with owners of tomcats, where the joke is instead that their cat is always roaming around and looking for mates.

This trope can also appear for animal or animal-like characters, ranging from Partially Civilized Animals, humanoids with animal characteristics, or aliens/monsters. In this case, heat is depicted as a more annoying version of menstruation. The trouble comes from the character's need to breed, as well as oftentimes heat itself being depicted as uncomfortably hot to experience. Mating season is prime humor potential because even normally mellow or sophisticated characters can't avoid their base instincts.

Another common joke is people in the wilderness during mating season. This usually leads to an animal attack due to the high amount of animals in the area.

Compare to My Instincts Are Showing, No Periods, Period, and All Periods Are PMS.