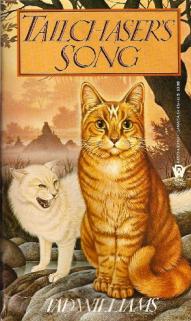 Tailchaser's Song is a Fantasy novel written by Tad Williams and published in 1985. The story follows several feral cat communities, united in their beliefs and by their service to the Queen of Cats residing at Firsthome, the ancestral birthplace of Catkind.

The cats of the novel have their own mythology: they believe that everything was created by a feline god called Meerclar Allmother. The world was originally populated with cats, children of the Two: Harar Goldeneye and Fela Skydancer. Notable among the children of the Two are the three firstborn: Viror Whitewind, Grizraz Hearteater, and Tangaloor Firefoot. Driven by his jealousy of his siblings, Grizraz creates a demon hound to kill everyone. Whitewind succeeds in stopping it, but dies in the process; later, Tangaloor traps Grizaz beneath a tree. Grizaz, after being trapped underground for a while, is blinded by the sun, and digs a hole into the Earth, where it is said he still remains....

Fast forward, and we meet Fritti Tailchaser, a tomcat in the Meeting Wall Clan. His family mysteriously disappeared some time ago, and he was left with no one but his friend, Hushpad. Later, she disappears too. As it happens, quite a few cats have been disappearing, and the Clan Elders send an envoy to Firsthome to ask the Queen for help. Tailchaser is not selected, so he sets out on his own with his lovable friend Pouncequick. Other members of Tailchaser's fellowship are a crazy cat named Eatbugs and Roofshadow, a sole survivor of a cat massacre.

Tailchaser's Song also has its own brand of T. S. Eliot-inspired honorifics. They are born with their "heart name" (equivalent to the Japanese first name—such as Fritti, Tangaloor, Sresla, etc.) that only family, close friends and lovers can use. They are appointed a "face name" at an old enough age (equivalent to the Japanese last name—Tailchaser, Roofshadow, Pouncequick, etc.) which is their commonly used name. They have to discover their third and most special name, their "tail name," by themselves.