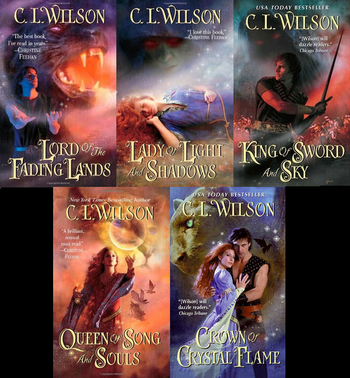 A series of books by CL Wilson that blends High Fantasy and Romance. It began in 2007 with the publication of the first novel, Lord of the Fading Lands, which was followed by a sequel within a month. Originally intended as one book, the Tairen Soul series has expanded to become a quintet.

In the distant past, a cataclysmic, continent-wide war later called the Mage Wars swept across the world of Eloran, drawing the various races into an extended and bloody struggle. The primary combatants of the war were the Eld, a long-lived race of human-like mortals dedicated to mastering all magics and conquering the world, and the Fey, a race of wonderful, beautiful, heroic, dedicated, proud, silvery luminescent-skinned champions of light.

During the war, the mages of Eld killed Sariel, the e'tani (mate) of Rainier vel'En Daris, a Tairen Soul (Fey who have the ability to transform into Tairen), and the Feyreisen (Fey King). Rain, being quite put out over this, promptly went insane and decided to scorch all life from the face of the world. After slaughtering millions in a mad blood frenzy, he was finally detained by the rest of the Fey. By this time, the Mage Wars had ended, with the Eld withdrawing and seemingly disappearing. Rain was brought back to the Fey homeland, the Fading Lands, and kept in quiet seclusion as his madness raged.

1,000 years later, Rain, feeling much more calm after a centuries long cool-off, emerges from solitude and uses the immensely powerful Eye of Truth to try to deduce how to help the dying Tairen. It sends him to Celieria, the capital of the human kingdom, with a vague image of a woman with red hair and green eyes.

In Celieria, Ellysetta Baristani, the 24-year old adopted daughter of a woodcarver, is nearing the end of her years of marriage-eligibility, and finds herself being forced into a betrothal with the butcher's son Den Brodson. When it is learned that the Tairen Soul is coming to Celieria, Ellie's younger twin sisters ask her to accompany them to the ceremony. Unexpectedly, during the ceremony, Rain appears and claims Ellysetta as his Shei'tani, his one-and-only, soulmated mindlinked true love.

Originally starting off as a romance situated around Rain and Ellysetta, the Tairen Soul series eventually expands into a High Fantasy plot involving heavy amounts of magic, politics, and The End of the World as We Know It, with the forces of darkness being led by Vadim Maur, the High Mage of the resurrected mages of Eld, with an increased focus on worldbuilding and plot.