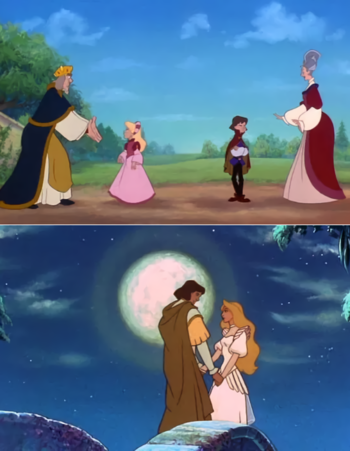 A childhood betrothal turns out to be true love.
"Yesterday, my mom and dad told me I was getting engaged to the grandson of my grandfather's best friend. We're Japanese-American so it wasn't that unusual. So today I met my new fiance and realized that it was the same guy that I spent 3 hours with on Facebook, debating whether Pokémon was better than Yu-Gi-Oh!. I think it's fate."
— My Life is Average

No one likes an Arranged Marriage, especially those so betrothed. They'll rip their clothes, gnash their teeth and swear to... was that them necking in the atrium?

Despite their initial opposition, the couple who have been betrothed discover they not only like each other, but love each other, and make it perfectly clear that even if they weren't in an arranged marriage they'd still choose to marry or at least start dating. Drama being what it is, you can expect their earlier attempts to undo the arranged marriage will mature and succeed, and their parents set them up with a new fiancée or fiancé that they do hate. Expect one or the other to have to swallow their pride and come out and say they do love the other.

A variant is that both meet outside of the home environment (before or after the declaration) without immediately recognizing each other. Maybe they ran away from home entirely, only to happily embrace "a fellow in misery" — and later commiserate about their bossy parents. Eventually, once they recognize one another, their shared common ground helps them fall in love.

Sometimes this perfectly arranged marriage doesn't come about randomly, but intentionally by parents, like a Batman Gambit scenario. One or more of the parents involved who knows both well enough has arranged the marriage since both are highly compatible and could naturally fall in love. In fact, this is the purpose of an 'arranged marriage' in the first place. It is akin to a matchmaking service, and the couple will generally have some sort of courtship before tying the knot, and it's very rare for someone to be forced to marry a person they despise. Even a Gold Digger would want a decent relationship if for no other reason than to help in securing the knot.

In other cultures, however, especially feudal societies, marriages would be struck between noble houses to secure alliances, build power, get closer to the throne, etc. In cases like this, the couple's individual romantic tastes are a very low priority, as they see the marriage as a duty to their families. But then it turns out they love each other after all.

This trope is frequently used as a justification for the use of the Arranged Marriage and Altar Diplomacy tropes to audiences with Western sensibilities, who are often uncomfortable with the concept of forced marriage. It's not a violation of free will if both want to get married, after all.

Compare Marriage Before Romance for when a couple has gone through with a marriage for other reasons than love and only then starts to develop feelings for one another. Expect a lot of arguing and bickering to contrast with the more idealised love story of the unwed, ending in a big Aw, Look! They Really Do Love Each Other moment, to the surprise of everyone, most of all themselves.