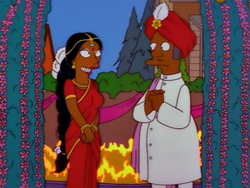 When Apu's mother from India comes to visit him to remind him of the arranged marriage that was planned for him since he was a child, Apu decides to pose as Marge's husband while Homer is sent to live in the Springfield Retirement Castle.