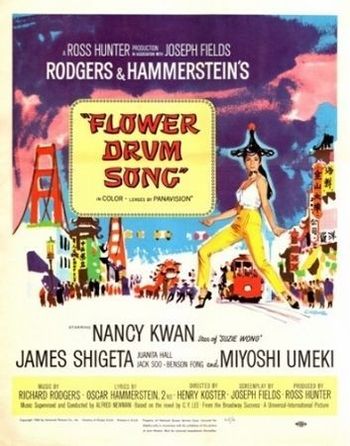 "A hundred million miracles are happening every day!"
Advertisement:

The novel is about Wang Chi-yang, an aging Chinese immigrant to San Francisco, and his trouble assimilating into American culture. The Lighter and Softer musical changes the focus to his son Ta's search for a bride.

The musical begins with Mei Li and her father Dr. Li's illegal arrival to San Francisco. Mei is in an arranged marriage with Sammy Fong, but he is already going steady with a showgirl at his nightclub, Femme Fatale Linda Low. Linda has left Sammy because she is frustrated he won't marry her. Trying to get out of the marriage with Mei, Sammy introduces the new arrivals to Master Wang whose son Ta, a university student, is single. Mei quickly falls for Ta but Ta falls for Linda during a group date. Linda sets her sights on him as her future husband. But then there's a third love interest, Helen Chao, Linda's Girl Next Door friend who is also in love with Ta...

Although not among the most well-known musicals by the song-writing duo, the stage and film productions are notable for having almost all-Asian casts (including Nancy Kwan, Miyoshi Umeki, James Shigeta, Jack Soo, James Hong). Flower Drum Song averts many negative tropes associated with Asians in American media during the 50s and 60s, including Mighty Whitey, Mighty Whitey and Mellow Yellow as seen in another Rodgers and Hammerstein musical, The King and I; and Yellowface, though not all actors were Chinese or Chinese-American.

Tropes applicable to both the musical and film:

Tropes applicable to the film: