Film / The World of Suzie Wong 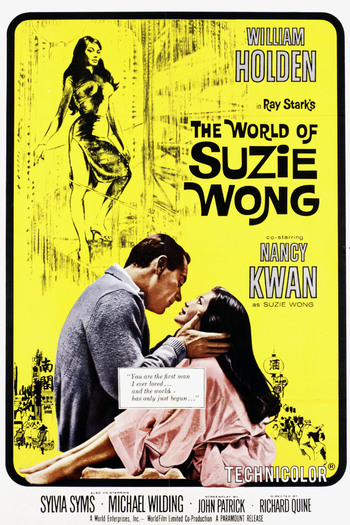 The World of Suzie Wong is a 1960 romantic drama film directed by Richard Quine, based on the 1957 novel of the same title by Richard Mason.

American architect Robert Lomax (William Holden) is an aspiring artist who relocates to Hong Kong for a year to see if he can make a living as a painter. On the Star Ferry en route to Hong Kong Island, Lomax meets Mee Ling (Nancy Kwan), a seemingly proper young woman of lofty social status. When he arrives to the island, by chance, he sees Mee Ling leaving a run-down hotel in the Wan Chai district, and in the bar next door, he is bemused to find Mee Ling again, this time dressed in a slinky red cheongsam and in the company of a sailor, where it becomes clear that she's actually a call girl. This time, she calls herself Suzie Wong.

Robert asks Suzie to model for him. As they get better acquainted, she begins falling in love with him, but he tries to dissuade her, although he finds her very appealing.