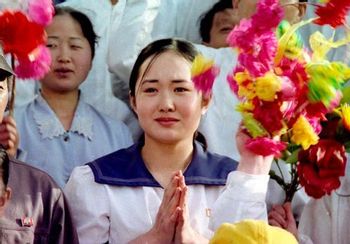 A 2006 film from North Korea that played at the Cannes Film Festival. It was lucky enough to be distributed internationally via a French company. It's one of only a few North Korean films to be shown commercially outside that country.
Advertisement:

Kim Su-ryeon is a teenaged Naïve Everygirl who is upset that her scientist father is never around. She's frustrated that he has failed to obtain a doctorate, which would allow the family to move out of their ramshackle house and into a fancy apartment. She also doesn't understand why her mother is so okay with it. Su-ryeon's younger sister, Su-ok, is a promising soccer star at their school. Eventually, Su-ryeon's father makes a breakthrough of some kind, and she realizes the importance of selfless devotion to the State.