Film / The World of Henry Orient 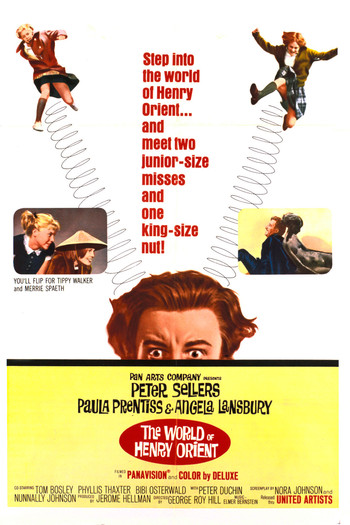 The World of Henry Orient is a 1964 comedy-drama film directed by George Roy Hill, starring Peter Sellers and Angela Lansbury. It was adapted from a novel of the same name by Nora Johnson (who co-wrote the script with her father, veteran Hollywood screenwriter and producer Nunnally Johnson).

Set in New York City, it tells the tale of two teenage girls, Marian "Gil" Gilbert (Merrie Spaeth) and Valerie "Val" Boyd (Tippy Walker), who go to an all-girls prep school and bond by having "adventures". One day, while in Central Park, they come across Henry Orient (Sellers), a third-rate concert pianist, who is there with Stella (Paula Prentiss), a married woman he's trying to score with. Soon after, Valerie becomes infatuated with Henry, and she and Marian start to follow him around, turning his life upside down. Things get even more complicated when Val's domineering mother, Isabel (Lansbury), finds the girls' scrapbook and jumps to the wrong conclusion.

Was later turned into a Broadway musical, Henry, Sweet Henry.