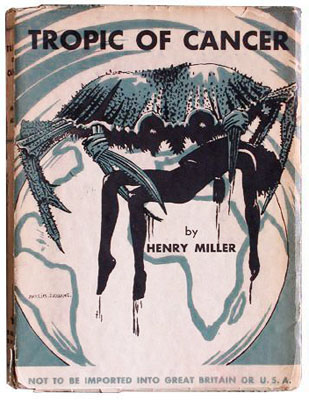 The original cover, ironically, is one of the least Contemptible Covers the book has. And no, there is no giant crab note By the way, check the banned footnote
“I am living at the Villa Borghese. There is not a crumb of dirt anywhere, nor a chair misplaced. We are all alone here and we are dead.”
— The book’s opening line

Tropic of Cancer is a novel by Henry Miller, published in 1934. However, it’s known mostly for being the subject of much controversy in America for being considered obscene and pornographic.

The novel follows the author and his dealings in Gay Paree while struggling as a writer, having sex, meeting with friends, having sex, going to social clubs, having sex, uttering non sequiturs and, you know, having sex. It doesn’t really go in circles around sex, though, it focuses heavily on the other issues, all this mixing autobiography and fiction, past and present, with a Stream Of Consciousness approach.

So yeah, it sounds just like your pretentious intellectual novel. And it is. However, the achievement of the novel is Miller's honest approach to reality, ignoring the sex taboo of the age. It was acclaimed by famous writers like George Orwell and Samuel Beckett.

It was successful enough to spawn a sequel, Tropic of Capricorn, which was also controversial and banned in several countries.