Literature / Too Funny For Words 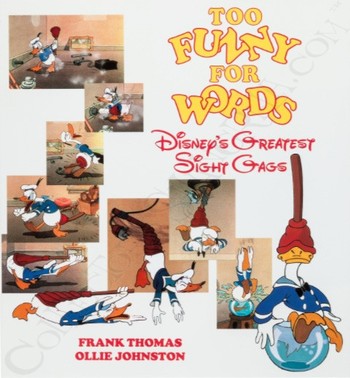 It was made as a follow-up to their previous book The Illusion of Life: Disney Animation, and is a history and art book that goes into detail about Disney's style of gags and story process for them, covering works up from Oswald the Lucky Rabbit up to the later Disney features, although the book mostly focuses on Disney's short cartoons. The first half of the book tells the history of Disney's brand of humor and what influenced it, and the second half of book largely eschews text in favor of demonstrating the kind of gags Disney uses with pictures alone.

The book goes into detail about several different kinds of gags: The Spot Gag, the Running Gag, The Gag-That-Builds, the Action Gag, the Tableau Gag, the Inanimate Character Gag, the Funny Drawing, and Specialized Gags (i.e. the Color Gagnote nothing to do at all with race based humor—the term refers to using various hues to create emotional responses, the Effects Gag, the Caricature Gag, and the Surprise Gag).

This book was later followed up by Frank and Ollie's other books Bambi: The Story and the Film and The Disney Villain.