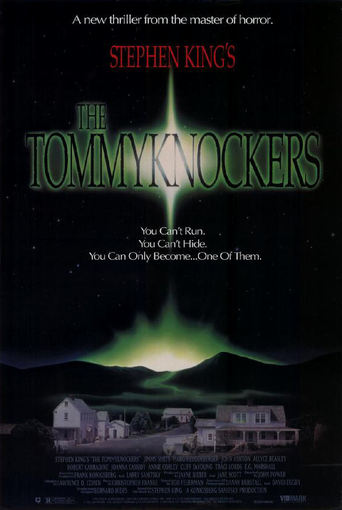 "Late last night and the night before,
Tommyknockers, Tommyknockers, knocking at the door.
I want to go out, don't know if I can,
because I'm so afraid of the Tommyknocker man."
Advertisement:

The Tommyknockers is a 1987 novel by Stephen King.

While walking in the woods near the small town of Haven, Maine, Roberta "Bobbi" Anderson, a writer of Westerns, stumbles upon a metal object which turns out to be the slightest portion of an alien spacecraft, that crashed into Earth in prehistoric times. She begins to dig it out, and slowly becomes obsessed with it. Meanwhile, her best friend, alcoholic poet Jim "Gard" Gardener reaches the nadir of his life, and decides to kill himself, but changes his mind when he feels that she is in trouble. He travels to Haven, and finds Bobbi at the point of complete exhaustion. While the spacecraft has no effect on him because of a steel plate in his head, he still decides to help her in unearthing it, hoping to change the world for the better with the power it holds.

As more and more is exposed of the ship, the inhabitants of Haven begin to change (the process is called "becoming"), and they become like the aliens who built it (dubbed the "Tommyknockers" after a nursery rhyme); they gain telepathic abilities, and build futuristic devices from simple household appliances. Gardener, seeing that their intentions are far from his idealistic goals, starts to doubt himself, and thinks he should do something against them.

The story is influenced by HP Lovecraft's short story The Colour Out of Space and the British television serial Quatermass and the Pit. King wrote the book during a period of substance abuse, and has written that he realized later on that the novel was a metaphor for that addiction.