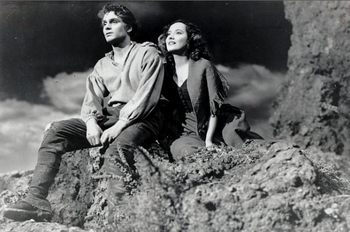 Wuthering Heights is a 1939 film directed by William Wyler.

It is, of course, an adaptation of Wuthering Heights by Emily Brontë. Mr. Earnshaw, owner of a Yorkshire estate called Wuthering Heights, brings home a child named Heathcliff, a homeless urchin he found in Liverpool. His daughter Cathy takes an immediate shine to Heathcliff and they become friends, but Cathy's arrogant brother Hindley hates Heathcliff and abuses him terribly. After Mr. Earnshaw dies and teenaged Hindley becomes master of the house, he kicks Heathcliff out of the main house, banishing him to the stables as a servant.

Cut forward a decade or so. Adult Heathcliff (Laurence Olivier) still labors as a stable boy for the Earnshaws. He and adult Cathy (Merle Oberon) have fallen in love, but Cathy, who has become accustomed to a life of pampered wealth, declines to run away with Heathcliff. Meanwhile, Hindley, now an alcoholic wastrel, still hates and abuses Heathcliff. When neighbor Edgar Linton (David Niven) starts paying romantic attention to Cathy, Heathcliff leaves the moors, vowing revenge. Edgar and Catherine marry. Many years later, Heathcliff comes back to Yorkshire, bent on revenge—a revenge that eventually involves Edgar Linton's sister Isabella.