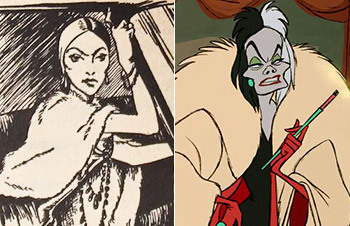 From beauty to harridan.
Mary: How come they made me fat and have red hair?
Larry: Because you're the comic relief!
— Dialogue from Animated Adaptation of the band Limozeen in Homestar Runner
Advertisement:

This may be done in the case of villainous characters to make them more Obviously Evil, or in general it may be a case of Ability over Appearance if it's decided that an actor uglier than the character in question can play the part well. Another reasoning for this is that they didn't get it right in previous adaptations, especially for live-action ones.

Besides villains, this is also common for Comic Relief characters as well. The adapters want to make it obvious to kids that the hero's sidekick is the funny guy, so they turn him a Big Fun Fat Comic Relief. This may also be done for the sake of not having the sidekick overshadow the protagonist.

Compare Adaptational Modesty, when a fanservice character is toned down in adaptations. When this is done to a real life person, it's Historical Ugliness Update.