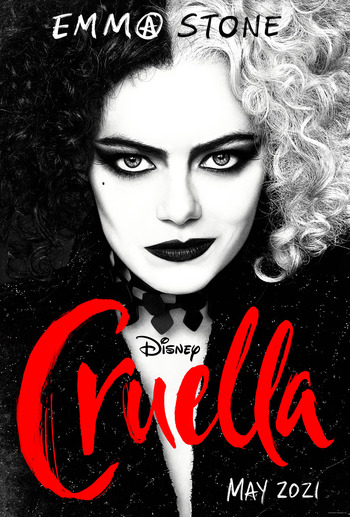 "There's lots more bad things coming... I promise."
Baroness: You can't care about anyone else. Everyone else is an obstacle. You care what an obstacle wants or feels, you're dead. If I cared about anyone or anything, I might have died like so many brilliant women with a drawer full of unseen genius and a heart full of sad bitterness. You have the talent for your own label. Whether you have the killer instinct is the big question.
Advertisement:
Estella: I hope I do.

Cruella is a 2021 live-action film from Walt Disney Pictures directed by Craig Gillespie (I, Tonya), which is part of the 101 Dalmatians franchise and one of the Disney Live-Action Remakes. Glenn Close, who portrayed the title character in 1996's 101 Dalmatians, is an executive producer on this film.

It chronicles the origin story of its Dalmatian-hating villain, Cruella de Vil (played by Emma Stone), against the backdrop of 1970s London, following her transformation from a young grifter named Estella into the infamous fur-coat obsessed madwoman.

The film also stars Emma Thompson as the Baroness von Hellman, Joel Fry as Jasper Badun, Paul Walter Hauser as Horace Badun, Emily Beecham as Catherine, Kirby Howell-Baptiste as Anita Darling, and Mark Strong as John. It was released simultaneously in theaters and through Disney+ Premier Access on May 28, 2021. The film became available to all Disney+ subscribers on August 27. A sequel to the film was announced to be development a week after its theatrical debut

. Stone is set to return as Cruella, as are Gillespie and co-writer Tony McNamara.

. You can also watch the first nine minutes online here