Only One Female Mold 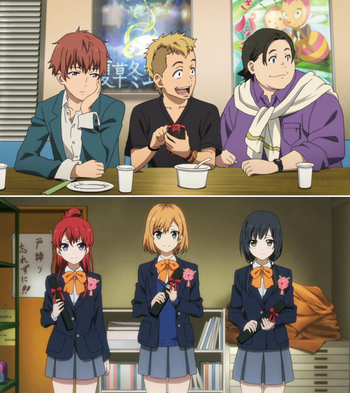 At least the female characters (bottom row) are just as diverse in hair color.
Advertisement:

In most animated works and comics featuring an ensemble cast, the male characters will have a wide range of body types — The Smart Guy will often be small and slender, The Big Guy will be either huge and muscular or endearingly pudgy, and The Hero will typically be somewhere in between.

Female characters, however, tend to have almost identical body shapes — typically standing one head shorter than the hero, relatively slender build, very little muscle definition. Breast size varies depending on the work, but in many cases, all the women in the cast will have the same cup size. Surprisingly, this even applies to works with an all-female cast.

This often applies to most supporting characters, too. Occasionally, a fat girl may appear as a minor comic relief character, but she will never join the main cast.

Compare Sexy Dimorphism, where this trope is applied to fantasy monsters for fanservice reasons. Contrast Amazonian Beauty, Big Beautiful Woman and Bust-Contrast Duo. See also World of Buxom, Only Six Faces, Generic Cuteness, Heroic Build (for when this trope applies to superheroines) and Reused Character Design (for a non-gender-specific variant). Related to Most Common Superpower.