Series / Jason and the Argonauts 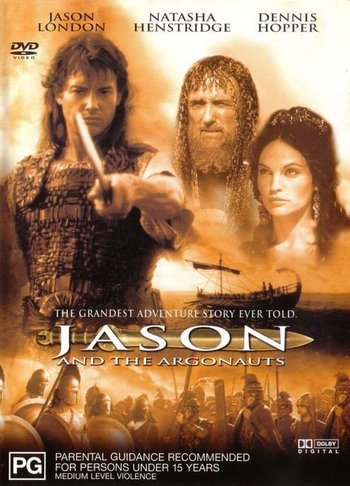 Jason and the Argonauts is a two-part television miniseries based on the story of Jason and the Argonauts in Classical Mythology, directed by Nick Willing and featuring a cast that includes Jason London, Natasha Henstridge, Dennis Hopper, Frank Langella, Derek Jacobi, Olivia Williams, Angus Macfadyen, Jolene Blalock, James Callis, and Brian Thompson. Produced by Hallmark Entertainment, it first aired on NBC over two nights in May 2000.

The story revolves around the hero Jason (London), rightful heir to the throne of Iolcus, whose throne was usurped from his father by Evil Uncle Pelias (Hopper). Pelias offers to give Jason the throne if he sails to the end of the world to claim the Golden Fleece, something which many have tried but failed. Jason gathers a Badass Crew, including Hercules (Thompson) and other Greek heroes, and sets sail aboard the ship Argo. Together, the Argonauts encounter all sorts of adventures along the way. Jason's love interest is Medea (Blalock), a sorceress, and the gods Zeus (Macfadyen) and Hera (Williams) play roles in the story as well.

It has no connection with the 1963 film Jason and the Argonauts apart from being based on the same source material.