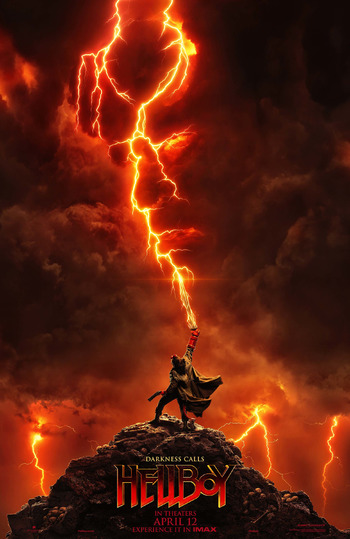 "Save the world. Just for the Hell of it"
Hellboy: You made me a goddamn weapon.
Professor Bruttenholm: I just wanted to help you become the best... you.
Advertisement:

Hellboy (Hellboy: Call of Darkness in some regions) is a 2019 supernatural superhero film based on the Dark Horse Comics character of the same name created by Mike Mignola. It is directed by Neil Marshall.

The story has Hellboy (David Harbour), the red-skinned demon who was adopted and raised by humans, squaring off against Nimue the Blood Queen (Milla Jovovich), a medieval sorceress who seeks to destroy mankind.

The film is a Continuity Reboot of the two previous films by Guillermo del Toro. It shares no cast members with the earlier films and has an R rating.

Ben Daimio: I thought we were supposed to be fighting monsters, not working with them.
Hellboy: Who you calling a monster, pal? You look in the mirror recently?