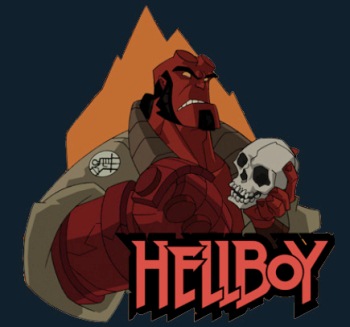 An animated adaptation of the Hellboy comicbook series. They're a distinct continuity, closer in spirit to the comics, but they feature actors (Ron Perlman, Selma Blair, Doug Jones, and John Hurt) reprising their roles from the live-action film series, along with the addition of Peri Gilpin as Kate Corrigan.

Japanese folklorist Professor Sakai opens a forbidden scroll and becomes possessed by demons. While investigating Sakai's disappearance with a BPRD team (including folklorist Kate Corrigan), Hellboy touches a samurai sword left behind at the crime scene, and is suddenly transported into a Magical Land based on Japanese Mythology. There, Hellboy learns that the storm demons Thunder and Lightning are sealed within the sword. If freed, Thunder and Lightning will unleash a storm capable of loosing the dragon Ogdru Jahad and all its offspring, bringing about the end of the world. Hellboy also confronts a series of youkai (directed by the demon-possessed Sakai), nearly all of them intent on breaking the sword and freeing the storm demons.

Meanwhile, Kate Corrigan attempts to solve the mystery of Hellboy's disappearance, as massive storms begin forming (due to the weakening of Thunder and Lightning's prison) and the first wave of "dragons" are freed. Liz Sherman and Abe Sapien become trapped on a deserted ocean island, and must fight one of these dragons.

It's worth noting that the scene where Hellboy meets a group of nukekubi is adapted almost verbatim from the one-shot comic "Heads", which Mike Mignola cited as one of his favorite Hellboy stories.

Hotel mogul Oliver Trombolt requests that the BPRD investigate the supposed haunting of a house he's renovating into a resort. In spite of the fact that Trombolt is clearly doing this as a publicity stunt, Professor Bruttenholm takes an interest in the case and suspects that something genuinely supernatural is occurring. Bruttenholm leads a field team, including Hellboy, Liz Sherman, and Abe Sapien, to investigate.

It soon becomes clear that the hotel truly is haunted... by the victims of Erzsebet Ondrushko, a countess who, decades ago, sold her soul to the witch-goddess Hecate, bathed in the blood of innocents, and was eventually killed by Bruttenholm himself. The BPRD team is assaulted by harpies, hell-hounds, and a werewolf, all servants of Ondrushko intent on raising their vampire mistress from the dead. Hecate herself takes an interest in the proceedings, using them as an opportunity to tempt Hellboy to join team evil.

The Blood And Iron DVD also includes an Animated Adaptation of the comics' "The Iron Shoes" story. In addition to the two films, several mini-comics were set in the Animated continuity. A third film (''The Phantom Claw'', the debut of Lobster Johnson) was planned but never came to fruition.