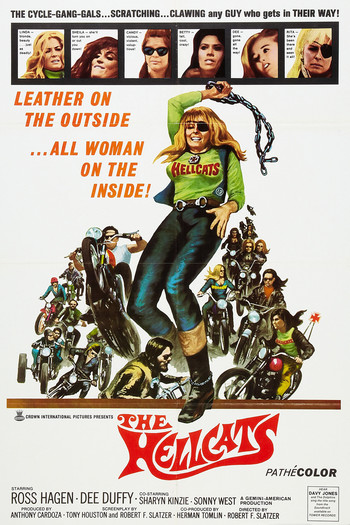 A crime boss named Mr. Adrian (Slatzer) uses the titular motorcycle gang to carry out his drug runs. A policeman, Detective Dave Chapman, is in with the Hellcats and trying to get solid evidence on Adrian through them. However, the girlfriend of the Hellcats' recently deceased leader, Sheila (Sharyn Kinzie), informs Adrian of Chapman's plans, and he is assassinated while out on a drive with his fiancee, Linda Martin (Dee Duffy).

Dave's brother, Monte (Ross Hagen), has returned from active Army duty and vows to go after his murderers, learning about the gang from his notes. Joining up with Linda as his would-be girlfriend, they present themselves to the Hellcats as fellow bikers and work their way into properly joining the gang to find information on the drug ring. Through the gang's escapades with a rival gang, Monte finds himself falling for Sheila, who eventually trusts Linda enough to take her out on a run. It goes afoul when the biker carrying the drugs crashes off the road and her bike (holding the stash) is impounded by the police, forcing the Hellcats to send someone in to retrieve it, but he, too, is caught.

Sheila rides off to talk to Adrian, and both Linda and Monte follow her; Sheila is tied up alone, and while Adrian is interrogating Linda, Monte's rescue attempt falls flat, getting him tied up as well. Sheila manages to free them both, and as she runs to a pay phone to call the Hellcats, Monte again fails to save Linda, and they are both taken to the harbor by the crime ring. The Hellcats arrive, beat up all of Adrian's thugs, and free Monte and Linda. His brother avenged, Monte says his goodbyes to Linda, then rides his bike into the distance.

The Hellcats provides examples of: