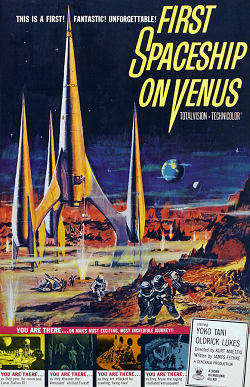 "In Nineteen-Hundred and Eighty-Five, during the course of the work undertaken to irrigate the Gobi Desert, a strange fragment of rock was discovered! Several remarkable features of this rock attracted the attention of the scientists engaged on the project! Research revealed it contained a spool! Further analysis showed the material to be extra-terrestrial in origin and not of human manufacture; where did it come from?"
— Opening Narration
Advertisement:

First Spaceship On Venus (aka Planet of the Dead, Silent Star, Spaceship Venus Does Not Reply) is a 1960 East German/Polish film based on an early Stanisław Lem novel depicting the investigation of a strange message which apparently originates with the planet Venus. An English dub was released in the United States by Crown International Pictures in 1962.

Determining that the meteorite/spool does indeed contain some mysterious message and that it was indeed launched from Venus, Earth's interplanetary spaceship Cosmostrator I (Kosmokrator in the original) is dispatched to investigate. Shortly before arrival, the message is decoded: it is a blueprint for war, the Venusians planning to irradiate the Earth's surface. However, upon landing on Venus, the astronauts find only an inhospitable environment, and no Venusians. The crew of the Cosmostrator must continue investigating, to determine where the Venusians are, what their plans are for the human race, and what the human race can do about it.

Of interest is the fact that the American dub quite naturally omits a long section where an American scientist fights with his own government over an expedition to Venus before defecting to the East, who of course never let bureaucracy and nationalism interfere with the pursuit of knowledge. With this lengthy Cold War subplot gone, the American version manages to be less dated than the original purely by accident.

Note that this article, in general, employs the names of the characters as provided in the English dub. For the sake of international readers, the following cast list is provided (copied from That Other Wiki):