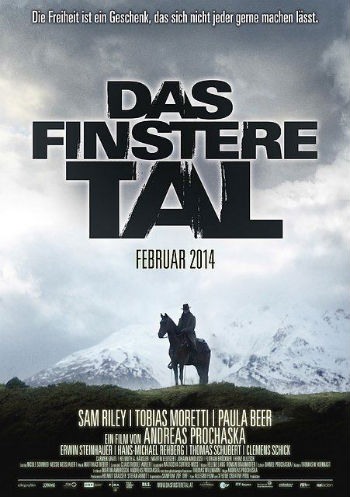 Freedom is a gift that not everyone likes to receive.
"Sinnerman, where you gonna run to?"
Advertisement:

Das Finstere Tal (in English, The Dark Valley) is a 2014 Austro-German film starring Sam Riley. It was chosen to represent Austria in the Foreign-Language Film category of the 2014 Academy Awards.

A mysterious American stranger called Greider arrives in a tiny Tyrolean village in the Austrian Alps to take photographs of the people and landscape. He rents a room from a widow and her daughter, and soon discovers the dark secret haunting the town: it is under the thrall of the powerful and sadistic Brenner family, consisting of six brothers and their father, who exercise Droit du Seigneur on all the women of the village and routinely terrorize the villagers for no reason other than petty villainy. But Greider has secrets of his own, including how he speaks German so well for a foreigner...