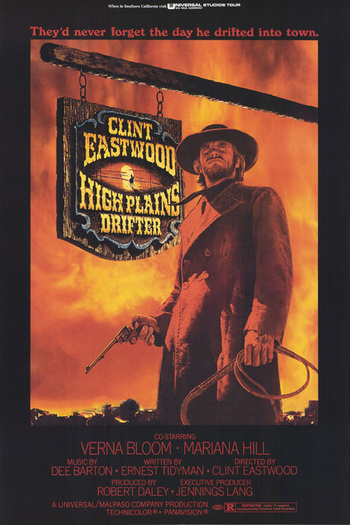 Mordecai: What did you say your name was again?
The Stranger: I didn't.
Mordecai: No. I guess you didn't at that, did you?
Advertisement:

High Plains Drifter is a 1973 Western directed by (and starring) Clint Eastwood, with a screenplay by Ernest Tidyman (The French Connection, Shaft).

In the Old West, a mysterious drifter referred to only as "The Stranger" rides into the dismal mining town of Lago, which has a crisis on its hands: three ruthless gunmen are making their way to the town so they can settle scores over an old wrong done to them by the townspeople. After the Stranger kills a group of men hired by the cowardly townspeople to protect Lago, the town's elders decide to hire the Stranger as their protector. The Stranger only agrees to take up the role after the town meets his bizarre demands — including painting the town's buildings red and rechristening the town itself as "Hell".

As the Stranger trains the townsfolk to take arms and the gunmen draw closer, the hidden secrets and corruptions of the town begin to unravel, and the truth behind Lago's feud with the outlaws — and their culpability in the death of a federal marshal, with whom the Stranger has a connection — soon comes to light...

A Deconstruction of the Western genre with supernatural overtones, High Plains Drifter is one of Eastwood's most popular and acclaimed films.