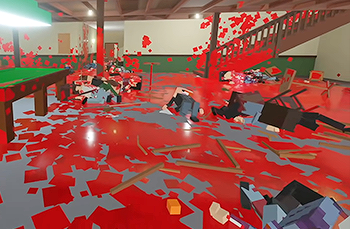 In the course of a Cruel and Unusual Death or even when it's just that Everybody Was Kung-Fu Fighting, things get messy. And the things that suffer most are the buildings (inside and out) in town that get covered in everyone's blood. It's usually also the sign of a particularly violent person walking around just doing what they do best. Someone may help the job along by leaving a Bloody Handprint. High-Pressure Blood could also do the trick, as well as a victim dealing with a gaping head wound. Particularly shown when a director takes creative liberties on death scenes.

If a hero comes running back home only to find their family and friends used this way, it may lead to a Heroic BSoD.

Usually goes well with Gorn with a side of Ludicrous Gibs for in-your-face action. Contrast Bloodless Carnage.

Not to be confused with Paint the Index Red.