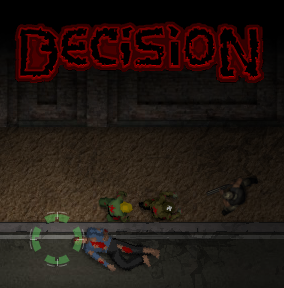 The first note in the diary.
I made a decision. More and more cities become zombie's colonies dropped into the darkness. Earlier, I have only heard of soldiers who left the army who try to clean the cities. One of them saved my life and I joined them. There aren't too many of them that is why they work alone. He gave me a gun and I want to try. This is my decision.
— The introduction of the first game
Advertisement:

Decision is series of Adobe Flash games made by Fly Anvil Studios. The player's objective is to make a city safe from the undead by capturing and fortifying all the outposts in the city. The action is from a top-down perspective with two possible control schemes, using the mouse to move and shoot, or using the WASD keys to move and the mouse to shoot.The first thing the player must do to conquer a zone is scout the area, searching for a way to the factory, outpost, and main street in the area. Once that is done, the player must then capture the area's outpost to help reduce the threat level.

As the player captures later zones, they will have to deal with more dangerous zombies, including ones that can use guns, ones that explode upon death, and even giant zombies.

The series currently has five games:

With the end of service of Flash, the games other than Red Daze now have to be played through an emulator.

This video game series contains examples of the following tropes: