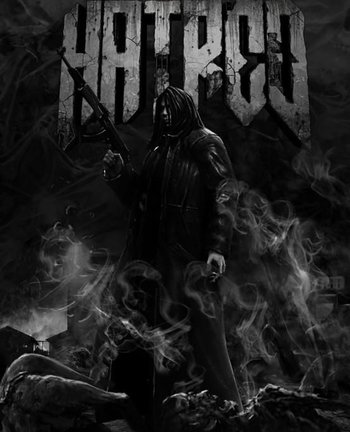 No one will be safe. No one will be saved.
"My name is not important. What is important is what I'm going to do... I just fuckin' hate this world. And the human worms feasting on its carcass. My whole life is just cold, bitter hatred. And I always wanted to die violently. This is the time of vengeance and no life is worth saving. And I will put in the grave as many as I can. It's time for me to kill. And it's time for me to die. My genocide crusade begins here."
— The Antagonist, teaser trailer
Advertisement:

Hatred is an isometric third-person shooter released in June 1, 2015 for the PC. It revolves around the Antagonist, a misanthropic psychopath leading a one-man war on the citizens of New York State. Wanting to die violently in an insane and twisted Last Stand, the killer seeks to end as many lives as he possibly can after years of utter contempt for other human beings comes to a boiling point.

It is a PC exclusive title that was developed by Polish game development newcomers Destructive Creations. The game became infamous for officially receiving an AO (Adults Only) rating by the ESRB, becoming one of the few video games in history alongside Thrill Kill and Manhunt 2 to be given this rating simply based on its violent content.

The official website for the game can be viewed here.

The game is only available via Steam,note Attempts to get the game released on consoles were being considered by the developers, though the game may need to be censored to do so, as GOG.com has refused to carry it, and the AO rating has all but prevented the game from being licensed for any major home gaming consoles. A Nintendo Switch release was announced, though whether it will be released in its current state, or get released at all, remains to be seen. As Nintendo takes pride of themselves as purveyors of "family-friendly" media, the release of such a game on a Nintendo platform is perhaps up to debate. However, considering they let Postal of all things on their platform, it's a possibility. So make of that as you will.

A free Survival DLC was added on September 15, 2015. As the name implies, the DLC adds a new survival mode that chronologically takes place after the main campaign. The mode stars a trio of cultists who became affected by the events of the game and end up revering the Antagonist as a god, thus seeking to continue his work of "cleansing" the world. In February 2016, Steam Workshop support was also added.