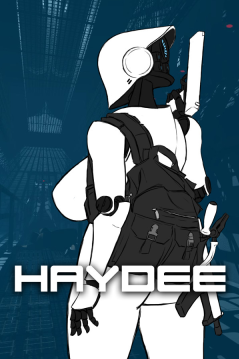 Haydee is a Metroidvania Indie Game with Third-Person Shooter and Platformer elements, developed by Haydee Interactive and was released on September 26, 2016 through Steam.
Advertisement:

You control the titular Haydee, a very scantily-clad and buxom cyborg woman making her way through a series of progressively difficult and grueling challenges within an Elaborate Underground Base, trying to escape. Along the way, she must contend with various traps, hazards, puzzles, and rogue robots that will mercilessly hunter her down. The game provides no hints, only a handful of supplies that players must carefully manage, and a limited number of opportunities to save their progress as there are no checkpoints. Only your instincts will see your way through Haydee's escape.

Haydee from the first game, would guest star as a racer in the Mascot Racer H-Game Shady Lewd Kart and she would also be an available skin in League of

The sequel, Haydee 2, provides these tropes below: