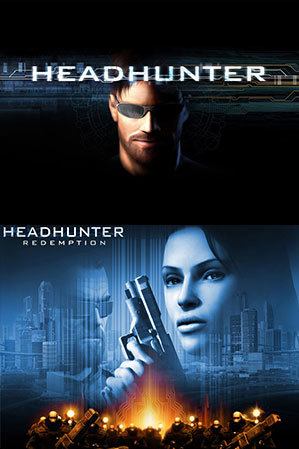 Headhunter is a third-person action adventure video game series developed by Amuze and produced by SEGA between 2001 and 2004. The first Headhunter was released for the Sega Dreamcast in 2001, and due to the system's cancellation, this version was only released in Europe. It would eventually be ported for the PlayStation 2 the following year for other regions.

Inspired by action movies of The '80s and science fiction films, particularly those by Paul Verhoeven, the first Headhunter takes place in Los Angeles 20 Minutes into the Future. Jack Wade is a headhunter who's suffered a case of Laser-Guided Amnesia after a mysterious incident involving him in a lab, and escapes with good old-fashioned explosions. A headhunter is basically a bounty hunter that doubles as a cop, whose job involves non-lethally taking down criminals, who then get their internal organs moved to help out the rich part of society. Jack's amnesia means that he's introduced to everything about society in this future. Expect motorcycling, shooting guys down with stun guns, and a conspiracy involving criminals and science gone bad, while taking many gameplay and thematic cues from Metal Gear Solid and Resident Evil. The game's cinematic soundtrack, composed by Richard Jaqcues when he was working at Sega of Europe, was performed by a live orchestra and the first video game soundtrack to be recorded at the famous Abbey Road Studios in London, where many film scores were recorded prior.

Headhunter Redemption followed in 2004 for the PS2 and Xbox, and was much Darker and Edgier than its predecessor. Set 20 years after the events of Headhunter, the world has become much, much worse. After a virus was released that nearly crippled society and a great earthquake occurred, there are now two parts of society, Above and Below. Above is the surface, while Below is underground that appears to be occupied by criminals and machines, the latter of whom pose a bigger threat to the people Above, as they are controlled by a mysterious individual only known as The Man Who Walks With Machines. Jack, divorced from Angela, also lost his son when the machines abducted him years ago, leaving him a bitter and Grumpy Old Man. He finds a partner in Leeza X, a rebellious young criminal hacker who grew up on the streets of Above, and the game focuses on exploring much of her past. As they discover that a gang of weapon smugglers may be connected to Below, there's hope that Jack might find his son and the tension between Above and Below may finally end. While the first Headhunter had a mix of light and dark tones, this one didn't pull things back, creating quite a contrast between the games. It did well, but not as good as the original. Richard Jacques returned as the game's music composer, and while it was not performed by a live orchestra this time around, the soundtrack retains the cinematic feel.

Both titles were the sole games developed by Amuze, which shut down in 2005.

Not to be confused with the films The Head Hunter or Headhunters.

Tropes for the Headhunter series include: