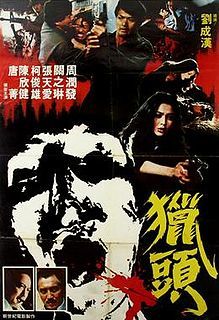 The Head Hunter, also known as Long Goodbye and Hunting Heads, is a little-known Chow Yun-fat movie from the years before he was discovered by John Woo. Made in 1982 and directed by Shing Hon Lau, its dubbed version is in the American public domain.

Nguyen Dich (Chow Yun-Fat) is a former Vietnamese soldier who immigrated to Hong Kong following The Vietnam War. By day, he works in a film studio as a special effects technician, but by night, he works for the local triads as an assassin. While he makes a good living, what he most wants is to bring his family, who are currently in Saigon, over to Hong Kong so that he can get out of the business. After falling for a beautiful TV reporter (Rosamund Kwan), the two discover that the film company that Nguyen works for has been manufacturing chemical weapons for the US. Eventually, Nguyen’s past comes back to haunt him in the form of Kim Tai Yung, a fellow soldier who wants to kill him for abandoning him during the war, and in the end, someone is going to get his head chopped off. But who will it be?

Not to be confused with the 2019 Viking horror film of the same name.