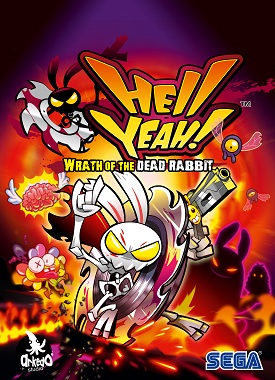 Hell was once ruled with an iron claw by its undead ruler, King Hare, but even in Hell no one lives forever. When King Hare passed on, his duties of ruling Hell were passed onto his son, Prince Ash. Ash ruled the underworld with his tyranny, and all was good for the new ruler. But Ash has one embarrassing secret he wishes no one to know about: he has a thing for rubber duckies. Then on one fateful night, a paparazzi snuck into Ash's bathroom while he was taking a bath and took pictures of him playing with his favorite rubber duck (named Ducktator) and posted the tabloids on the Hellternet for all to see.
Advertisement:

With his good name being slandered all across Hell, Ash sets out to recover the evidence, find the 100 monsters who had seen the incriminating photos, and kill them all.

Hell Yeah! Wrath of the Dead Rabbit is an indie action-platformer developed by Arkedo Studio, the makers of Big Bang Mini and the Arkedo Series of Xbox Live Indie Games and PlayStation Network titles, and published by Sega. In this game, Ash must repair his reputation in Hell by finding the monsters that know about his secret and disposing of them in a variety of over-the-top ways with Mini-Game finishers ala WarioWare. To do that, Ash must outfit himself with an arsenal of guns and his father's old jet pack/giant buzzsaw/drill to access new areas. Along the way, Ash can pick up loot scattered across the stages of the game and waste his money on upgrades, guns, clothes and skins for his jet-pack.

The game was released onto Play Station Network on September 25th, 2012 and the day after for Xbox Live Arcade Note (unfortunately, it was never made backwards compatible with Xbox One). A PC version of the game was released through Steam on October 3rd, 2012; the PC version can also be found on Sega's e-Shop and Amazon's download service.

While Ash repairs his reputation, please enjoy the following tropes: